The Angle Snow Blade skid steer attachment can be useful to quickly and cleanly move snow. Virnig engineered these plows to have a perfect blade curl, which means snow rolls cleanly off the plow and puts it right where you demand it. Snow removal does not have to be a stressful activity, with these simple tips and techniques it can be safe and enjoyable.

Which Position Should I use? 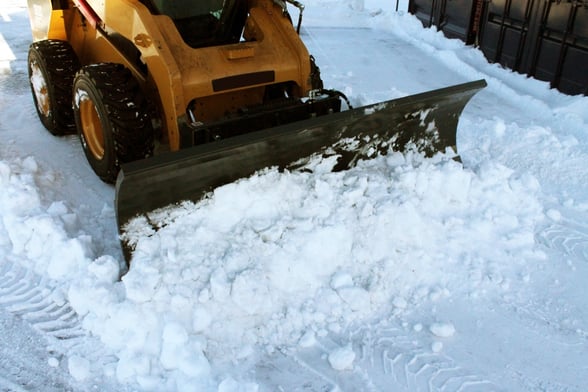 Use the straight position for removing large windrows or cleaning up at the end of the job. 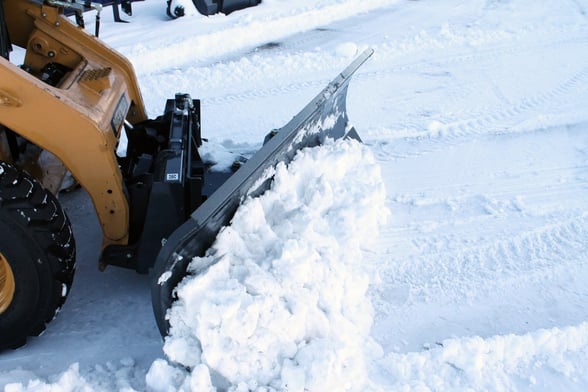 In this position, the blade is angled to either left or right side of the skid steer loader.
Use this position for windrowing or widening after the first pass.

Plowing fresh snow is always easier. Wet snow can freeze which requires chipping to break it loose before attempting to move it. From the start of the season, push the snow far enough out to allow room for future snowfalls. Avoid overloading your angle snow blade, push only enough snow with each pass to get the job done.

To start a pass, accelerate slowly allowing for maximum tire traction and blade to accumulate snow. As you come to the end of the pass, back off the accelerator. It might take several passes to clear deep, wet and/or compacted snow from an area. If the skid steer loader's two front tires are off the ground then you are applying too much down pressure.

With the Angle Snow Blade angled to the left or right side of the vehicle, make consecutive passes, each time throwing the snow forward and to the side. Windrowing is extremely useful for clearing parking lots and large open areas.

To remove snow from the edge of a building, raise the blade and drive forward to the building. Lower the blade, then back up while pulling the snow away from the building. You should backdrag only two or three skid steer lengths before turning around. You can then back into the cleared area and push snow forward.

At the end of the job, adjust the blade to the straight position and push snow directly ahead, cleaning up any spill off left from previous plowing.

In deep snow raise the plow several inches off the ground to shear off the top layer. If you have a V-Blade, use the V-position for the first pass. Then change to the scoop or angle position to widen things out. You should push just enough snow with each pass to get the job done efficiently without overloading your machine or snow plow.

Deep or heavy, wet snow, because of its increased weight, calls for more skillful and powerful plowing than light powder snow. Heavy snow may also require clearing a path or a work area to provide you room to move snow to another area.