When to Use a V-Snow Blade Skid Steer Plow

Are you overwhelmed from the amount of snow you have to remove over the winter? The V-Snow Blade is here for you. It's designed to save time and money that can be passed on to your customers or your bottom line.

I'm convinced the “V” in “V-Snow Blade” stands for versatile. Its unique positions allow for quick snow removal in some of the worst blizzard conditions. Versatility is the name of the game when you know what jobs are the best fit for this attachment.

You can move a V-Blade into different angles by varying the direction of hydraulic and duration of flow. Each position offers a unique way to move snow.

Plow through the deepest drifts in the V-position. In this position, commonly used for the first pass, both blades are tight to the skid steer. It minimizes the space needed to effectively maneuver around vehicles in high traffic areas, like parking lots.

The V-position allows the skid steer to break through snowbanks with ease. It is also used to get into parking lots and large driveways that have been plowed in by municipal plows during large storms. 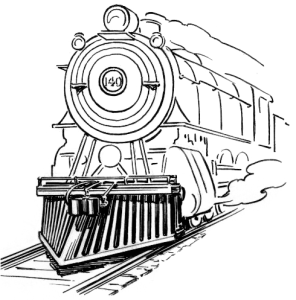 Think of the front of a train. Often, they're V-shaped to deflect obstacles and push them out of the way, just like the V-Snow Blade.

The V-position also minimizes strain put on the plow and skid steer, allowing you to effectively plow in some nasty road conditions.

In the angled position, the blade is facing either the left or right side of the skid steer loader. Use this position for windrowing or widening after the first pass.

Use the straight position for removing large windrows or cleaning up at the end of the job. You can also set both blades straight for back dragging from a door. 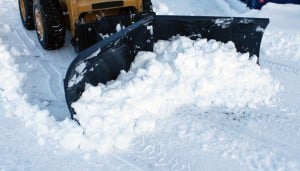 Quickly cleanup leftover trails using the scoop position. It's best for clearing parking lots or other large areas where snow must be pushed straight ahead rather than to the side.

This is the real money saver. You'll find the scoop-position to be useful for many plowing situations. The V-Snow Blade is much faster than an Angle Snow Blade when cleaning up the streets.

The Best Uses for a V-Shaped Snow Blade

Just like any snow plow attachment, the V-Snow Blade is most effective for certain types of snow removal.

The secret to clearing uneven surfaces with one pass is in the design. Virnig’s free-floating design automatically adapts to uneven ground in all directions. Since it moves independently from the skid steer, the edge will maintain full blade contact with little to no operator adjustment.

Virnig’s floating frame not only tilts the blade up and down but also oscillates it from side-to-side. This unique combination delivers full down pressure and snow containment to scrape surfaces clean the first time.

To remove snow from the edge of a building or object, raise the blade and drive forward to the object. Lower the blade, then back up while pulling the snow away. You should backdrag only two or three skid steer lengths before turning around.

At the end of the job, adjust the blade to the scoop position and push snow directly ahead, cleaning up any spill-off left from previous plowing.

One of the major benefits this plow offers is stacking or shelving snow in scoop position. Since the blade sticks out further than a pusher or bucket, it allows snow to be stacked better and higher. It is a night and day difference.

The best surface types for this plow are hard, like tar or cement. When plowing over hard surfaces, raise or remove the plow shoes so the cutting edge will scrape as close to the surface as possible. The more down pressure put on the cutting edge, the more likely it is to scrape clean. Careful though. It's possible to put too much pressure on the blade. An indicator of too much pressure is if the front tires on the skid steer aren't touching the ground.

On soft ground, the blade will trip a lot easier, which makes plowing a lot tougher. To keep the cutting edge from tripping, skid shoes (or plow shoes) help keep the snow blade off the surface, allowing you to plow snow without digging into dirt or gravel surfaces.

Keep in mind the Virnig V-Snow Blade isn't meant to push or move dirt. Never use it to push anything other than snow.

Find the Right Snow Plow For Your Job

The Virnig V-Snow Blade can help remove the stress from snow removal. Check out our Ultimate Guide to Skid Steer Snow Removal Attachments to help you select the right attachment for the job at hand.